Note: Since I was getting lots of comment spam I've closed comments here.  If you have any comments or suggestions, feel free to file them on the Firebug Issues page or drop us a line in the Firebug discussion group in the Tabs on Top thread.

The Firebug tabs-on-top UI refactoring has finally landed in Firebug 1.4 alpha.  You can download it as firebug-1.4.0a17.xpi (or later) from http://getfirebug.com/releases/firebug/1.4.  This change is pretty close to the one I described and prototyped in February (see Improving the Firebug UI) and which in turn follows my original proposal from late last year (see Firebug UI: Tabs on the Top).  These blog posts describe the reasoning behind the change so I won't rehash it in full.

The old layout had a toolbar at the top of the Firebug UI, and a tabbed "panel bar" below it.  Sometimes a tabbed "side panel bar" would show up to the right of the main panel bar.  This change essentially takes the toolbar and the side panel bar (when it appears) and puts them inside the active panel.  This puts the panel tabs at the top of the Firebug UI (hence the name "tabs-on-top") and panel specific controls underneath.  Several controls that are not panel-specific (the main Firebug menu, the search box, and the detach window and close window buttons) have been moved to the tab strip, so they are effectively in the same location as before the change.  The idea is that UI elements that are specific to a panel look like they are inside that panel.  This description probably makes the change sound more complicated that it really is.  A screenshot will better communicate how it looks. 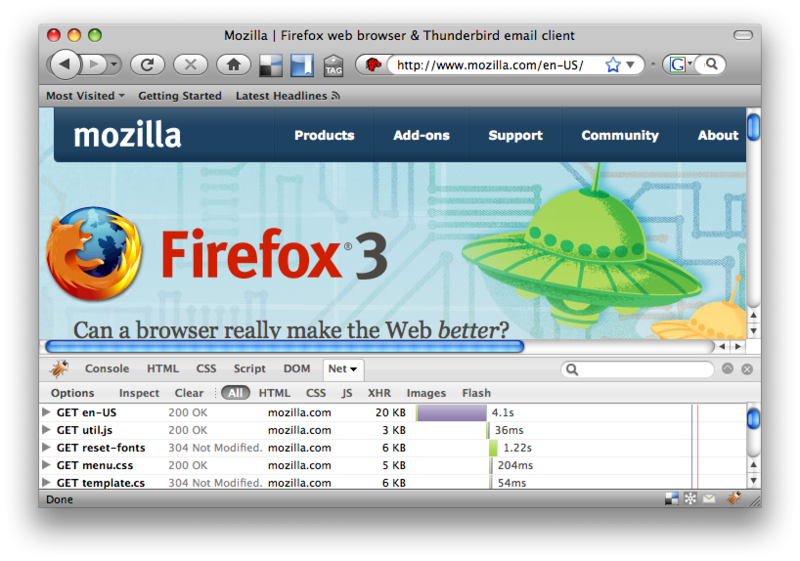 Firebug UI with the tabs-on-top layout.  The Net panel is selected.

Even the screenshot is a poor substitute for actually downloading the extension and trying it out, so let me encourage you to do that. There are still some outstanding issues, before this change can really be called complete.