Introduction I've been using Eclipse as a C++ IDE for Mozilla development, which apparently puts me in a distinct minority among Mozilla developers.  Since I'm neither an Emacs nor a Vim user, I needed an alternative.  Frankly, Eclipse is not all that great as an editor, but having an IDE with halfway decent identifier completion and code browsing goes a long ways towards making up the difference.  It's not all that hard to set up an Eclipse project for mozilla-central (i.e. Firefox), but it's not exactly obvious either.  The purpose of this blog post is to explain one way to do so. Disclaimer and Caveats I'm not claiming that this is the optimal way to set up mozilla-central under Eclipse.  In fact, I'm not even claiming that it's right.  All I'm saying is that this approach is relatively simple and seems to actually work.  For expediency, these instructions make some assumptions.  First, they assume that you are developing under OS X.  I believe that they are easily adaptable to Linux and Windows+cygwin (or Windows+mozilla-build), but I don't know for sure.  Second, the instructions assume that you are already able to build mozilla-central from the command-line.  If you don't already know how to do that, then you don't want to start here. Disclaimer #2 As a final disclaimer, this approach is relatively new to me.  I've mostly been using an older version of the CDT under Eclipse 3.0 and I'm not even going to mention what I had to do to get indexing to work properly.  This new approach is a lot simpler, and I'm reasonably confident that it will work well for sustained use. Screenshots I originally wrote these instructions in text-only form.  I've since added some marked-up screenshots for many of the steps.  These screenshots are attached at the end of the post. Acknowledgements And last, but not least, thanks to Mike "firetoad" Collins for trying out a slightly earlier version of these instructions. Now the instructions.

Get the Source Code

Set up the .mozconfig file

Build the project under Eclipse

Build the project under Eclipse, again

Make sure indexing is started

After Indexing is completed 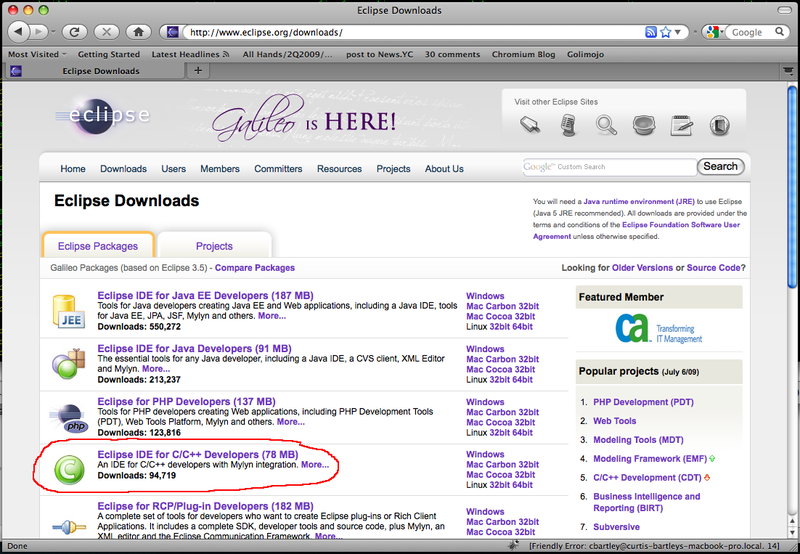